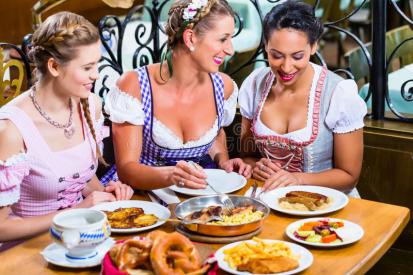 Need I say more? I think it’s even better in my forties and fifties than when I was twenty, perhaps because I don’t take my friends for granted the way I did when I was younger. At every age, I’ve had a few epic evenings out with my friends:

Like with Kimberly and Laura in Chicago, in the 1980’s. We regularly ate dinners at Turbot’s or PJ Clarkes in the Gold Coast, cupping warm, fresh baked rolls in our palms and ordering white wine with our salads. When Kimberly turned thirty, we spent an unforgettable night fending off guys and overindulging in peach schnapps (!) on North Avenue. I was 26.  When I came home that night, I kicked off my shoes in the hall outside the apartment and left them there overnight, lined up by the door as if this were my closet. I hung my stockings on the refrigerator door handle and left my clothes in a trail across the living room. The next day was rough.  I took the train back uptown to Laura’s, and we sat around groaning, nursing our hangovers with McDonald’s french fries. Kimberly’s still in Chicago, and after a few moves, Laura has landed in New Orleans. They both lived in St. Louis for awhile and I was envious, but also happy to know they could easily get together. We message each other with occasional callouts for a reunion in the Big Easy. It’s on my bucket list, for sure.  Without the schnapps.

Another particularly memorable GNO was with “the Broads,” a dozen fellow singers in the a cappella group BroadBand, at the old Watch City Brewery in Waltham. At the time, Waltham was still one of the few towns in the suburbs west of Boston to retain its gritty, working class identity (during the nineteenth century, it was the premier watch making city in the U.S., and it has a deep history in the twentieth century labor movement), although recently, millennial professionals looking for more affordable housing have started started to hipster it up.  We arrived en masse for dinner after a performance at the nearby Watch Museum, seating ourselves loudly in the front window.  We wore “cocktail attire:” Our gig uniform that night was black formal. We certainly stood out among the Boston brewery-goers in their Patriots jerseys and Red Sox hats. Another diner leaned over and asked politely, “Excuse me, but why are you ladies all wearing black?” “We’re a coven,” someone shot back, to the gentleman’s bemusement. And then we laughed and told him we were a singing group, and somehow we wound up on our feet performing for the tables around us, the servers leaning against the wall laughing, fellow patrons smiling and clapping, asking if we took requests.  Thereafter, we self-identified as “the coven,” casting spells to help various group members find love, or work, or get pregnant. We haven’t failed yet.

Tonight, I had dinner with my Nia sisters in Concord before a seven p.m. dance class:  Maria, Amy, Lisa and I. We had a little over an hour to spend together and we didn’t talk about anything particularly earth-shattering. (Although, Maria: we are totally serious that we want you to lead a Dance Spell retreat in Thailand in 2020. Let’s manifest that!) We didn’t get drunk or dance on the table or laugh so hard we snorted water out our nostrils; it wasn’t a Judd Apatow movie moment. We no longer need those, if we ever did. Yet it felt luxurious to spend time with these goddesses, sipping club soda through our cold steel straws, picking tortilla strips out of our salads, checking in on everyone’s well-being. Your women friends hold you in a different embrace than your partner or spouse, at least if that person is a man…not better, but with a distinct quality that’s nourishing and liberating and absolutely necessary.

Ok, ladies, you’re in my calendar for August 9.