Ok, I need to vent.  So if you’re not up for that today, I understand.  Go find something uplifting to do, take a walk outside, do something nice for a friend, get some exercise or read poetry or pat a dog.  Give a fiver to that homeless vet flying a sign at the rotary on your way home.  Use your God given talent, whatever it may be, with purpose and for good.  But my God given talent is words, and I believe that God, as I understand her/him/it, does not want me to bite my tongue and sit on my hands. If you don’t want to read a rant, I get it; move on, with my blessing.

I’m tired of saying I’m tired, aren’t you?  Tired of yet again, being told what I need to do is pray for grieving family members and school children who lost their son or daughter, brother or sister, niece or nephew,  best friend or classmate or teacher to another preventable mass shooting.  Tired of feeling helpless to enact laws or even talk about legislation that might protect children from gun violence in school.  Tired of hearing weary reporters describe yet another troubled, angry lost soul who took out his misery on innocents; tired of reading about the beautiful “angels” lost too soon; tired of candlelight vigils and church services and gutless, morally bankrupt politicians and pundits pulling long faces on Fox News or CNN, expressing regret about this or that tragedy, telling me to “pray,” and then steadfastly refusing to do jack shit about it.  Tired of waking up to headlines like “Fatal Rampage Lasted Just Minutes,” “Alleged Shooter Had History of Violence,” “Killer Armed with Multiple Weapons, Rounds of Ammo.”  Or increasingly, leads like this one from this morning’s New York Times: “Gunfire Erupts at a School. Leaders Offer Prayers. Children Are Buried. Repeat.”

I’m most enervated by these stories: “A Look at the Victims of the XYZ Massacre,” accompanied by pictures of fresh-faced children with sparkling eyes in cheerleader uniforms or first grade play costumes; with band instruments; hugging a friend; playing ball.  They are gap-toothed kindergartners, or teenagers– awkward nerds or glowing athletes or self-conscious selfie poseurs–all enshrined with words like “beautiful soul,” “leader,” “compassionate,” “amazing,” and, to me, one of the most heartbreaking adjectives of all: “promising.”  All that potential, the motherlove and fatherly devotion, all the family sacrifices and compromises made in the name of raising a beloved child, the soccer games and swim meets, music and dance recitals, the TV shows and best friends and bake sales and family squabbles that mark a son or daughter’s life—we parents live out these rituals with a profound faith in our children’s fruition into adult lives.  The president’s speechwriter yesterday actually did an okay job of noting the awful truth of that broken promise.

Here’s a headline from today’s paper to crack you in half: “A Mother Weeps for her Angel: ‘I Hope She Didn’t Die for Nothing.’”

Here’s a cruel reality.  She probably did.

How long will we continue to send our empty prayers to God, who must receive them at this point with disbelief: “What do you expect ME to do about it?”  Without our voices, God is voiceless, without our hands to do her work in the world, she sits paralyzed. Is she supposed to stop school shootings with well-timed bolts of lightning?  Why do we expect God to act when we do not?  Why should he comfort us in the face of our self-created paralysis? We’ve been granted free will, not a free pass to kick everything back to the guy upstairs.

Let’s look at Scripture on the subject:

In the same way, faith by itself, if it is not accompanied by action, is dead.   James 2:17

James has a lot to say about faith and action: “What good is it, my brothers and sisters, if someone claims to have faith but has no deeds? Can such faith save them?” “As the body without the spirit is dead, so faith without deeds is dead.”  “Be doers of the word, not merely hearers.”  (James 2:14 – :20)

Yet our leaders consistently invoke our prayers, as if that’s enough.  It’s NOT.  And I am so effing sick of their empty hypocrisy.  The President yesterday spoke directly to America’s children, assuring them they are loved, they need not be afraid, they have “people who will do anything to protect” them.  This is a lie.  What he won’t do to protect them is have a rational conversation about gun violence and its threat to public safety in our country.  Explain to me why it’s reasonable that any seventeen year old can buy an assault weapon, let alone a kid with a history of discipline issues and emotional disturbance.  Explain to me why my individual second amendment right to bear arms should be completely unfettered by any compromises for the public good, such as universal background checks or limits on how much ammo I can buy in a given year. I’m not proposing we take away anyone’s guns.  I am suggesting we should be able to have an adult dialogue about laws that seriously weigh our collective public safety against individual rights to bear an arsenal, and that some trade off acknowledging this tension is worth pursuing.  Otherwise, the rights of the Nikolas Cruzes and Stephen Paddocks of our country will continually trump the foundational rights of the rest of our “angels” –the freedom to go to school and survive is a fundamental example of the pursuit of life and liberty, isn’t it?    Explain to me how we are going to deal with the “scourge” of mental health in our country when the White House has yet to appoint a science advisor, when budget proposals slash funding from sciences, from the NIH, from the CDC, and when congressional leaders and the White House continually seek to unravel the Affordable Care Act, which requires insurers to cover behavioral health.  How are middle class or poor families to deal with the exorbitant costs of mental health diagnosis and treatment without insurance to help defray those expenses?  Explain to me why our society denigrates teachers, suggesting as a CLASS they are overpaid, underperforming, and lazy, when so many are in fact such dedicated professionals that they will literally take a bullet for their students. They show up for work every day, dedicated to providing the best education they can in circumstances that are too often underfunded, misunderstood, and increasingly, dangerous for them and for their students; they pay for Kleenex and school supplies out of their own salaries while the Ann Coulters of the world vilify them as useless, socialist government employees.

Certain news outlets would suggest that my views are typically hysterical, hand-wringing, sky-is-falling liberal attacks on the second amendment.  Tell that to the parents of dead students from Marjory Stoneman Douglas High School in Parkland, Florida or Sandy Hook Elementary School in Connecticut.  I suggest those parents are subject to all these “typical” emotions and worse right now, and that a response that insists on the urgency of dealing with gun violence as a public health crisis is in fact a.) the only rational one in the face of yet another senseless mass shooting, b.) the best way to honor their earth-shattering loss, and c.) an act of sacrificial empathy.  If that’s being a snowflake, I proudly melt.  Offering our prayers is too easy: the parents of Parkland, Sandy Hook, Littleton, and so many other towns, will suffer from the agony born of our inaction for the rest of their lives.  We owe them our deepest apology, the most hand-wringing, heartfelt, sky-IS-falling commitment to collective responsibility for remediating this uniquely American dysfunction.

This post is me putting my faith into action.  In the coming days, I’ll be combatting my sense of impotence and hopelessness by sending legislators photos and biographies of children killed by people wielding not simply untreated mental illness (yes, I agree, no question, this too must be addressed), but GUNS.  Perhaps I’ll write mock news stories about lawmakers’ kids to goose their imaginations along: “Ex-student kills 15 in deadly rampage at exclusive Maryland private school.  Baron Trump among the fallen.  A weeping Melania Trump said, ‘We are broken. He was our angel.  I hope his death wasn’t for nothing.’”  I’m no fan of the President, but I wouldn’t wish that pain on him or his family in a million years.  No parent should have to bear it.

When our son Nate was a freshman at Lincoln-Sudbury High School, an affluent and high-ranking suburban high school, a boy was stabbed to death in a bathroom early one morning by a troubled student.  Nate was already at school, buses and carpools had arrived and the day was starting.  The boy who died, James Alenson, was a 15 year old freshman. His obituary describes how he had worked at an organic farm and wanted to be a Counselor in Training at his summer camp.  He loved the Patriots and comedy, he was beloved by his parents and siblings.  He hadn’t known his attacker at all.  We will never know what might have happened if James’ murderer had brought an assault rifle to school that morning instead of a knife, but sadly, we can guess.   So don’t tell me mental illness is the only culprit in mass school shootings or that guns don’t kill more people.

An aunt, Lindsay Fontana, wrote on Facebook: ‘‘I had to tell my 8-year-old daughters that their sweet cousin Cara was killed in the shooting at Stoneman Douglas High School yesterday. We are absolutely gutted.’’

‘‘While your thoughts are appreciated, I beg you to DO SOMETHING,’’ she wrote. ‘‘This should not have happened to our niece Cara and it cannot happen to other people’s families.’’

We can start to do something by changing the dialogue from one about second amendment rights to a discussion of gun violence as a public health crisis.  For inspiration, see Nicholas Kristoff’s excellent piece:  How to Reduce Shootings

Thanks, New Yorker, for sending this email to me just now: 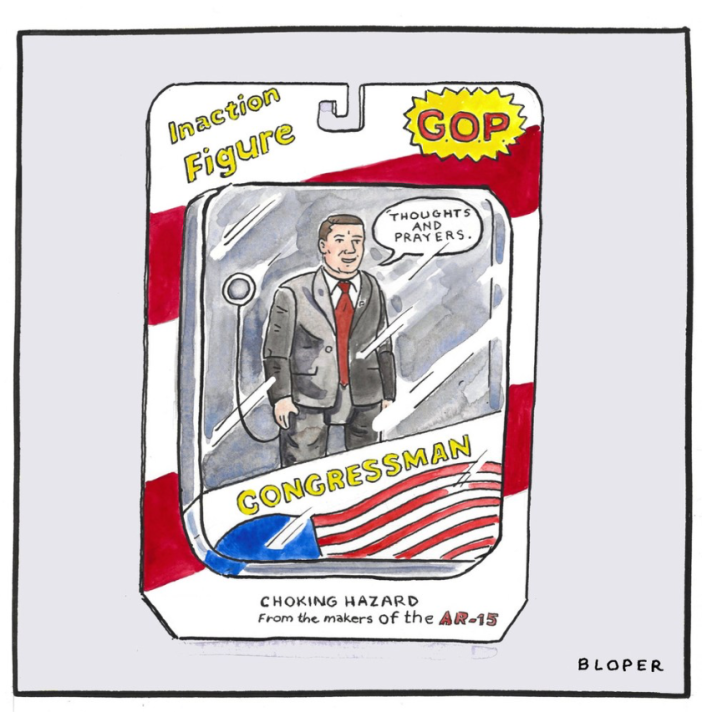 2 thoughts on “DO SOMETHING”