I sometimes listen to the morning news on NPR on my way to teaching my 8:30 a.m. Nia class.  Today, the anchors gingerly navigated reports of the West Wing venom du jour, this time the diction of our intemperate President more foul-mouthed and lowbrow than usual, even for him.  Were she alive today, my maternal grandmother would fix him with an icy glare and announce: “young man, we are going to wash your mouth out with soap.”  A nanny of ours once made me do this when I was six or seven years old.   I can’t imagine what I possibly could have said to earn such discipline, since I didn’t know any curse word stronger than “darn.”  I still remember the taste of the lather on my tongue; little flakes of soap in my teeth; the ensuing gag reflex. In circles less well-heeled than my grandmother’s, you’d say to the Prez:  “shut your pie hole,” at least, if movies and TV are to be believed.  I really wish POTUS would take a cue.  I mean, go ahead, do the job, enact your policies, even though I disagree with so many of them, you were duly elected, you’ve got the right.  But geez, wouldja give it a rest, please?  But sometimes the poison in a person’s heart is just too toxic to for even them to stomach; it’s gonna blow. I suppose if I spent as much time as POTUS allegedly does watching TV, I might also think that constant yelling (in general) and trashing those with whom I disagree (more specifically) is a functional way to conduct my life and relationships.  Yet I feel it’s important to note that there’s a clear connection between the content of our souls and the language of our speech.  Children’s book author N. D. Wilson describes the link prosaically in his study “The Rhetoric Companion:”

A man’s words reveal, first, the man. The words are not the man, and yet they reveal him faithfully and are to be identified with him. Out of the abundance of the heart, the man speaks. The foundational nature of all language is therefore metaphorical because every word a man speaks reveals himself—just as God reveals Himself through the Word. Every word spoken ultimately reveals the speaker.

The gospel according to St. Matthew is even more pointed:  “But the things that come out of the mouth come from the heart, and these are the things which defile a man.”  (Matthew 15:18)

Whichever side of the partisan divide you choose to dwell on, if either, it’s challenging not to feel freaked out or furious over the latest Tweetstorm or insult.  Whether you believe they come from POTUS and his sycophant friends at Fox News, or the liberal “elite”/”mainstream” media (can we quickly acknowledge the oxymoron of that framing?) like the “failing” New York Times, these provocations and prevarications distract us from our core values, like integrity, hard work, compassion, service to others, treating people with kindness and respect.  Our president, whatever you may think of his policies, regularly disgorges puerile, rude, dangerous, flat-out untrue or purposefully inflammatory and divisive language. The sort of stuff that if you said it as a kid, you’d be sent to the principal’s office, or your mom or dad would give you that look of grave disappointment that made you feel lower than a piece of dirty gum on the bottom of someone’s shoe.  Or like me that one time, you’d find yourself at the bathroom sink with a mouthful of Ivory soap.  Let’s be real, if you went to your workplace and slung around one one-thousandth of the BS and poison POTUS spews in an average week, you’d be dispatched to anger management class or diversity training at the very least, or demoted, or yup:  fired.  You would never get away with this sort of crass, temper-tantrummy behavior in your life, at your office or company, in your church or school, with your friend or spouse or kid or parent.  Why can our President?

We have become a nation of unfettered vitriol-slingers, and it’s exhausting.  It has us all walking around like exposed nerves.  Clearly, the trickle down of ill-manners and absent compassion are core to the problem we face; these are not just issues in the West Wing, they exist in popular culture and in media and all over the internet.  Part of the solution, I believe, is to resist the urge to respond in kind.  Je refuse.   I would much rather dwell on the values that unite us: compassion, decency, humanity, that straight-to-the-heart feeling you get when you unexpectedly encounter the face of kindness, of love, when you least expected it.

So I will happily write about the ever-changing quality of the light out my west-facing kitchen window:  in late autumn, tinted yellow by the leaves of the sugar maple in our backyard, butter light falls slantwise across the expanse of the backyard and fills the kitchen with a late afternoon luminosity that I only see at that time of year.  Now, in mid-winter, the light flattens to blue-gray, deepening the kitchen-y coziness inside–warm and aromatic–of the slip-covered nook where I settle to write.  I celebrate the wholesome beauty of our new thirty-something neighbor Jocelyn, who I drove past some weeks ago, her red hair piled high atop her head, cheeks flushed as she jogged her year-old baby and two year-old rescue dog along our rutted country road.  She’s a midwife, and her husband is a physician and researcher at the V.A. hospital in nearby Bedford. Nice people, good neighbors. I don’t know their politics and I don’t need to.  I could compose a sonnet about how refreshing it is to drink a glass of cold water when you’re really thirsty.  Or muse endlessly about the antics of my pets:  the black cat, Nyx (actually Lucy’s cat), binge-watching at the kitchen window birdfeeder, tail swishing but otherwise unmoving for an entire morning; Cordelia slinking onto the furniture like a shadow, guilty but helpless to stop herself; Westley slobbering on my keyboard, nudging my forearm for a pat before lumbering off to chew on his dog bed or find another sock to shred.  There is beauty everywhere, the world is drenched with it; it makes me want to weep sometimes.  Especially because there is also so much cruelty and injustice, selfishness and just plain rudeness, and it seems impossible to square the opposition.  I need only absorb vague insults about liberal snowflakes, feminst c*&ts, and blue-state progressives.  (None of them, except for the “c” word, insult me, by the way.  Not even “snowflake.”  Snowflakes are exquisite, sparkling, one-of-kind-miracles. I think it’s good to have a heart soft with compassion, to sense your soul melt with the heat of outrage at cruelty and hypocrisy, to defend the underdogs.)  I can only imagine how it felt this morning to wake up in America as a person of color, a Haitian or African immigrant, or a Dreamer.   For the record, let me say I don’t know whether the President is mentally ill (I’m not the one to judge that), or stupid (ditto), or incompetent.  I just think he acts like an arrogant jerk.  That’s not vitriol, by the way, just evidence-based observation.  The things which come out of his own mouth are what defile him, there are no speechwriters or Twitterscribes giving him a bum steer.  My opinion could be changed, although I admit it’s unlikely.  Ball’s in his court.

I don’t want to leave you, who’ve generously placed your time and trust in reading this post, without something more inspirational, a word or image to lift your spirits and brighten your day.  A story about a catch-in-the-heart moment when someone did me an unexpected kindness, or I saw the face of love shining out at me when I wasn’t looking for it:  a bird at the feeder, another driver gesturing to let me into his lane, a student entrusting me with an intimate detail from her life after class, even though I’m just a fitness teacher she sees once every couple of weeks.

So here’s an experience that’s stuck with me for the past few days.   Last week during the deep freeze, when the wind chill brought the temperature to minus ten degrees, I happened to go clear up a billing question about a new phone at the Verizon store. The retail manager, Manny, and I got talking about the arctic cold front, how we feel sympathy for the cops and utility workers, the plumbers and roofers whose work keeps them outside all day in this extraordinary chill.  I mentioned to Manny that I’d just been to a different gas station than usual, that I had pulled up to the self-serve pumps instead of full-serve so the guy who worked there could stay huddled inside. (I know, I’m a regular Mother Teresa.)  And Manny, who’s thirty-something, with a picture of two cute kids on his desk, and maybe clears forty grand a year working at the Waltham Verizon retail store, said: “I always tip those guys.  I mean, you can’t live on whatever they pay you to do that job.”   There it was, the face of love, where I least expected it.  It had never dawned on me before to tip the guy who pumps my gas at the station up the road, which has only full-serve pumps.  He’s Brazilian, fortyish, with dark, autochthonous features, his skin dry and cracked by the cold.  We’ve had chats before, about the weather, the traffic, the music playing on my radio – I was once listening to an Italian pop artist, the lyrics to “Parla mi d’amore” poured out of the speakers. He was intrigued, and we bantered about the similarities between Italian and Portugese while the pump hissed in the background.  Every time I see him, he smiles a beautific smile and pats my fender with his calloused palm to send me on my way. “You have a nice day,  nice lady.  God bless.”

Here’s another short story about kind words and deeds:  I took a break from writing this afternoon to walk the dogs before the rain started to fall in earnest.  Today’s warm weather has transformed last Thursday’s deep snow into ankle deep slush, and it was foggy and moist on the trails.  In some sections of the path, footprints of previous walkers and their dogs had filled with six inches of snowmelt, making each step a sloshing, splatter-filled adventure.  My “water resistant” boots were soaked through by the time I got to the halfway mark on my usual route, so I decided to take a short cut home and veered onto a patch of trail I rarely walk, basically just a little connector between the two main arteries in the trail system that crisscrosses the conservation land near our house.  Rounding the corner in the mist, feeling sorry for my water-logged feet and a little dissatisfied with my writing, I looked up to see a Christmas wreath tacked to a tree trunk, some twenty yards ahead.  A sheet of paper in a plastic sheet protector hung below it.  I trudged up to investigate.  It was a poem, credited to someone by the name of Noel S. Williams.  Next to the poem, another hiker had scratched in Sharpie, “thank you.”  It’s corny but kind, and so I’ll leave you with the words some tender-hearted soul left for me to find in the woods, surrounded by melting snow, on a bleak and slogging winter’s day, as I was contemplating the weight of words and the measure of a person’s heart: 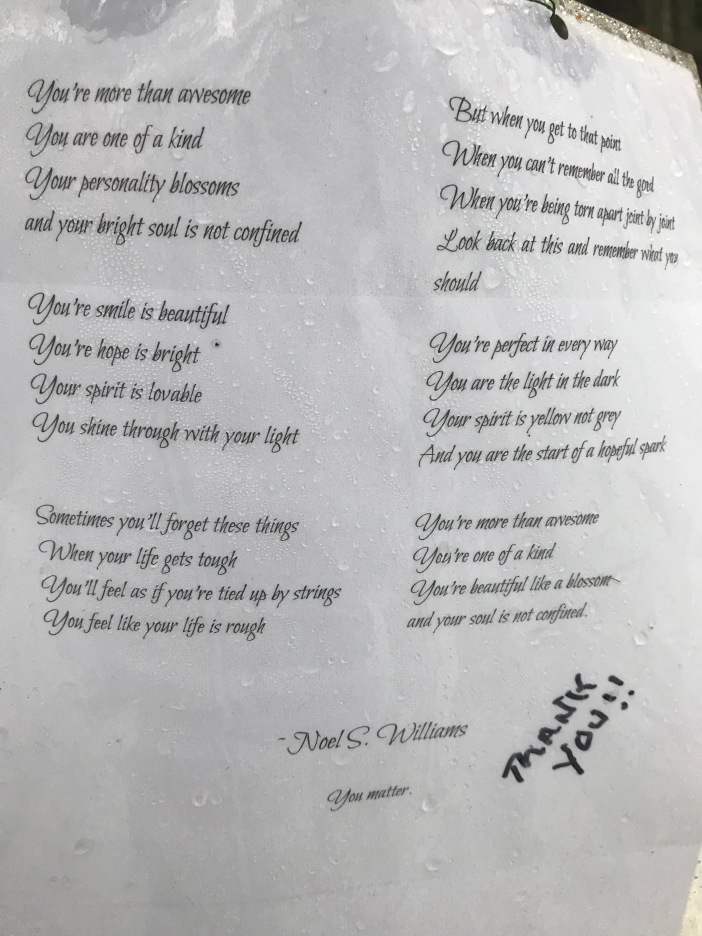 7 thoughts on “Heart in mouth…”