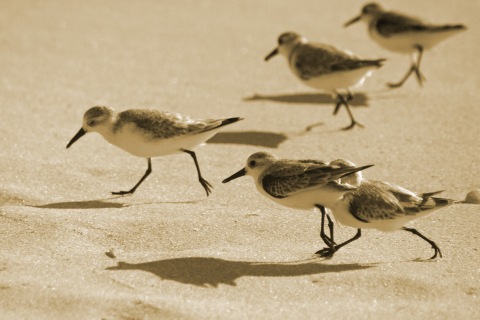 In Florida last week, we took a couple of long beach walks. One was aborted because I was coming down with the nebulous virus that plagued each of us to varying degrees: one of those illnesses where you feel off for a few days, a little dizziness here, some fatigue there, a persistent feeling of nausea that never materializes into a full blown stomach bug but puts you off food for a spell. The day we cut our walk short, we stopped on a deserted stretch of beach to wait out a surge of queasiness. We sat on a sand shelf up above the tideline and watched some sandpipers, their matchstick legs a blur as they zipped back and forth through the spindrift, racing up to the water line with each receding wave, and scurrying back to safety as new breakers rolled up the beach.

They are such busy little creatures. If you only watch their bird bodies, they appear to move in a completely horizontal fashion, like miniature speedboats racing on the surface of a serene lake. Yet their legs are constantly churning, churning, churning. Aren’t so many of us like that, whirring as fast as we can, yet presenting the impression that all is smooth sailing? I imagine a sandpiper’s natural facial expression, if she had one, would be a slightly manic, frozen grin, like the emoticon with all the teeth. As we watched, a trio of birds all went after the same buried snail. They scuttled up to the waterline and pierced the sand with their long snouts. One lucky guy came up with the prize, but the other two gave him a run for his money, pecking at his beak to dislodge the morsel. He came away victorious, trotting off beak held high, looking for all the world like a proud little mutt who beat all the Labradors to the tennis ball.

Both John and Mia lead sandpiper lives of late. John’s chief-of-staff went on maternity leave a few months ago, and he’s been doing the company-running part of his job solo, whilst also attending to clients, making pitches, giving speeches and seminars, flying to Houston today, Chicago tomorrow, Amsterdam next week. At the same time, he is working to develop a systems-based approach to social issues that arise from inequities like race and poverty. It’s a hard, hard job emotionally, because he’s a white male in his fifties and in his field, that’s an uneasy demographic; because he sees so much complexity and confusion, so many people of good intentions working at cross purposes; because problems like inner city kids not getting a fair shake with their suckish school systems are not easily solved, no matter what the politicians tell us about their better way; because he sets such high standards for himself. (A wife might say unreasonably high, but that’s a post for another day.) It isn’t exactly easy strategically, either. If it were simple to solve social problems, we’d have done it. He comes home from work exhausted. Straight after dinner, he heads for his laptop to plow through all the emails and attachments that heap up while he’s in meetings during the day. He plays a little tennis or reads a book before going to sleep, but other than that, he is tearing back and forth, chasing and running from waves, coming up with enough juicy tidbits to make the grind worthwhile. Yet he often feels like he’s just racing the tide.  And Mia is the consummate multi-tasking high schooler: directing a play, editing a literary journal, singing in three a cappella groups, doing her schoolwork with exacting standards, spending time with her friends and her boyfriend, binge-watching “Parks and Rec”, or “Friends” for the umpteenth time, deciding where to go to college, trying to steer through the shoals of anxiety, excitement, loss and gain that come with graduating from a high school that has been her second home. She juggles more balls than Ringling Brothers circus.  She is always tired.

The toll is different for people than for little birds, I imagine. Birds have to feed themselves, and this is how it’s done. We humans have a choice.  We can cut back, pare away, simplify. Doing so is a challenge. It goes against our culturally embedded Calvinist strain of work harder, do more, achieve more. Perhaps a remedy for sandpiper syndrome is to be more, maybe to take a vacation, even just for a few minutes, while sitting in your car or at your desk, and in your mind’s eye, watch the shorebirds as the waves roll in and out, and do nothing else.