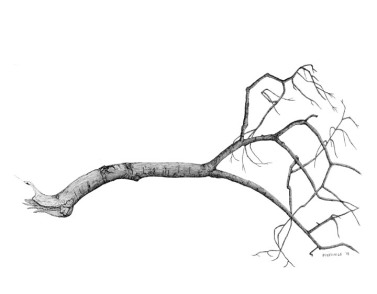 If troubles come in threes, then hopefully, we’re done.

It was nearly 60 degrees yesterday, another hide and seek Boston winter day, climate-change style. John has a Pavlovian response to such weather: the faintest scent of spring inexorably draws him, work-gloved, to the yard. So he headed outside among the little mounds of not-quite melted snow and not-yet picked-up dog poop that cover the squishy lawn, determined to clear up some of the fallen limbs littering our property after the snow. The most recent snowstorm followed a week of unseasonably mild weather, and the boughs were pliable under the heavy, wet snow. Branches as solid as ten inches in diameter came cracking down from the white pines and sugar maples that ring our house.

I assumed he planned to drag the fallen limbs over to the brush pile we have accumulated in the woods just beyond the landscaped edge of our yard. I did not know he intended to take on a topped-off Norway maple. The thirty footer had cracked at the trunk about two thirds of the way up, and the broken section nose-dived, top-first, down to the ground, where what had been upwards arching branches now impaled the soil. I promise you, if I had known he was going to attempt to cut this down, I would have done my utmost to dissuade him: “this is too big a job for one man, even you.” It is not likely I’d have succeeded. John is literally (and conveniently, at times) deaf in one ear. He is also more stubborn than a berry stain.

Spoiler alert: this story is going to the emergency room. Meta-spoiler alert: A compressed fracture of the T12 vertebrae. It could be better. But it sure could have been worse. No head injury, miraculously. The upended trunk – about 8” in diameter and 12 feet long, fell on his left shoulder but somehow completely missed his skull. We went out there and looked at it today, trying to figure out how such a large object could have fallen onto him from such a height and missed his head. We decided it must have collapsed at an oblique angle to his shoulder when he cut away one of the branches. It looks as though an offshoot, rather than the trunk itself, is probably what hit him, although he still bore the full weight, trunk and all. He seems to be feeling okay today, getting around fine, just a bit stiff, a little swollen around his shoulder blade.

I don’t want to dwell on the drama: EMTs rolling the gurney across the grass (John says he was thinking, “Fuck, they are going to leave ruts in the lawn.”), neighbors striding up from the road in concern when they saw the ambulance, or John staring daggers at me because I insisted he needed to go to the hospital to get checked out – by a DOCTOR. (“I’m fine,” he growled, “Look I can walk fine.” He said this while seated, looking pale, sweaty, pained.) I do want to dwell on the blessing. The whole time we were at the ER, I felt a stunned sense of gratitude that we were simply feeling irritated with the long wait time, rather than pouring over CAT scans showing bleeds and trauma.

For the car ride home, John had to wear the clothes he’d had on that afternoon when he’d fallen. They were clammy from melted snow, and he shivered loudly, teeth rattling while I blasted the heat as high as it would go. Shock.
Life can change in an instant.

There’s a song by Ingrid Michelson that our girls used to listen to a lot. It’s been playing silently in my head today:

And yet, we are so strong.